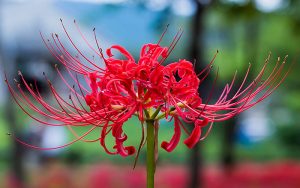 Gardening near the coast can present some unique challenges for a home owner. Although soil and water containing excessive salt can occur even inland due to overapplication of fertilizers, dry periods which don’t allow leaching of salts, and poor quality irrigation water, it is an even bigger hazard on the coast. Here, sea spray can cover foliage and soil even a few miles from the ocean, and salt water can intrude into ground water and wells. Most soils in Duval County test at less than 2 dS/m, a measure of salinity which is in the range of healthy plant growth. But local variation can occur, especially near the coast and in poorly draining sites, with soil salinity over 16 dS/m in some areas!

Salts in the soil or irrigation prevent water from being properly taken up by roots. Plants may wilt even though the volume of water should be sufficient. With greater salinity, salts may pass into the root, leading to toxicity in the plant. Observable salt stress symptoms due to salinity ranges from stunted growth and reduced yields, leaf burn (chlorosis) or needle tip browning and necrosis, to eventual death of the entire plant. Damage from saline soils are evident more slowly than from salt spray, and salt in the soil causes burn on leaf margins whereas salt landing on foliage creates burns throughout the leaf. But these symptoms can resemble symptoms from many other factors including disease, drought and chemical misuse. Testing your soil and irrigation water will reveal issues with salinity and help you diagnose and correct plant problems. These tests can be run by the UF/IFAS Analytical Services Laboratory. Contact them at (352) 392-1950 Ext. 221, email soilslab@ifas.ufl.edu, or use their website soilslab.ifas.ufl.edu. Form SL133 is used for irrigation and well water, and includes testing for sodium (Na) and chloride (Cl) levels (the two salts which cause the most plant damage) and electrical conductivity (total salinity level). Use Form SL135 for an analysis of soil salinity.

To put into perspective the results of your tests, here are some common values:

If your tests reveal excessive salinity, there are several ways to alleviate it. The soil can be aerated and amended to improve drainage, leached to flush out salts from the root zone, and mulched to prevent evaporation and a build-up of salts. Fertilize only when a soil test determines you need it. Since most plants are more sensitive to salt spray than saline soils, use of drip or ground surface application of irrigation would be better than sprinklers. Plants can be washed off with fresh water after a storm. Finally, plants tolerant of salt conditions can be planted.

Even knowing the above values it can be difficult to relate test results to determine the exact plants that will thrive in your situation. Most references use an intuitive definition of salt tolerance based on whether a plant can withstand conditions within a certain proximity to the ocean. Although they are only descriptive, there is much consistency in the use of the definitions. Zone 1 plants (Tolerant or Highly Tolerant) should survive an exposed beach location with salt spray as occurs along dunes and immediately adjacent to the oceanfront. Zone 2 plants (Moderately Tolerant) tolerate some salt spray but grow best when protected by other plants, structures or dunes. Zone 3 plants (Slightly or Not Tolerant) should be protected and grown well back from exposed areas.

Recent studies have begun to determine the salt tolerance of plant species based on their reaction to levels of salinity in their irrigation water, soil and foliar spray. But because salt tolerance appears to be influenced by a variety of factors including soil pH, soil type, soil permeability, irrigation protocol, climate, plant age and the intensity of other stressors on the plant, the original method of observation and description is still valuable. The following list of salt tolerant plants for North Florida is a synthesis of approximately 20 reliable sources for the coastal southeast. Ratings of High/Mod, for example, mean that some rated the plant as highly tolerant and others as only moderately tolerant. Rockaway Garden Center’s plant signs have icons identifying which plants are salt tolerant, but on signs we only include the more highly tolerant plants.